The fourth generation Toyota Coaster was unveiled on 22 December 2016 and was made available for purchase in Japan on 23 January 2017. It is available with the same engine choices as the outgoing model. The Coaster was the first vehicle to undergo a full redesign under Toyota’s newly incorporated Commercial Vehicle (CV) company responsible for the design and development of commercial vehicles. The fourth generation Coaster incorporates many safety features as standard including air-bags for the driver and front passenger, Vehicle Stability Control (VSC), a ringed frame body for increased roll-over protection, pre-tensioners for the seat belts and force limiters which reduce the pressure on the passenger’s chest in the event of a collision. 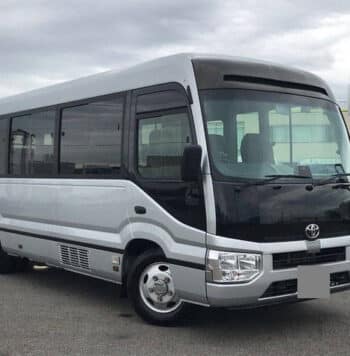